“If I’d just tried for them dinky singles I could’ve batted around .600.”

Babe Ruth said that, apparently. Clearly, The Sultan of Swat didn’t see too much difficulty in contact hitting. Ruth lived in a time when the hits were plenty but the extra-base hits were not; in 1927, the year Ruth hit 60 homers, the American League batted .286 but only slugged .399. Ruth accounted for 13.7% of the AL’s home runs that season.

As we all know, Babe Ruth hit a lot of home runs and his contemporaries did not. But what if Ruth decided to become a singles hitter?

We’ll also keep Ruth’s yearly and career at-bat totals the same (we’ll get to plate appearances later). Ruth had 8399 ABs over his career, so a .600 average gets him to 5,039 base hits. This places him safely atop the leaderboard, but since Ruth was a full-time hitter for only 16 seasons, the gap isn’t as sizable as expected. His career batting average record is safer, with a 234-point lead over Ty Cobb. 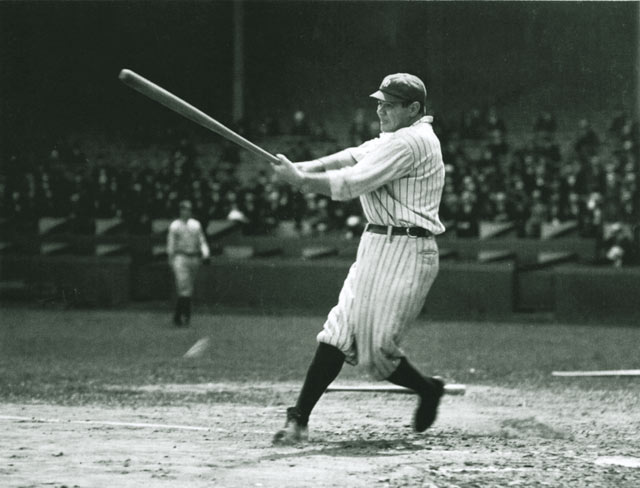 Since this new Ruth doesn’t hit anything but singles, he also owns a .600 slugging percentage. That brings him all the way down to 6th place, still ahead of players who were decidedly not dinky singles hitters, like Mark McGwire, the all-time leader in ISO. Speaking of ISO, Ruth’s would be .000, tied for last all-time with dinky-single disciples like Gene Good and Art Gardner (h/t to Baseball-Reference’s Play Index).

Surely, Ruth’s not striking out as much, since he’s (1) making fewer outs and (2) swinging with less force. However, it’s less difficult to predict what’s happening to his walk rate. He still has his great batter’s eye, and he still is a dangerous hitter, especially for the 1920s. However, with Lou Gehrig behind Ruth as the team’s new premier power hitter, there’s less incentive now to walk Ruth. I’ll drop Ruth’s walk total by 25% because, I dunno, it seems reasonable. He’s still walking a lot, as his new total of 1547 only drops him to 15th all-time.

So now we have a pretty clear picture of who the new Ruth is. He gets on base a lot, he strikes out less, and he has absolutely zero power. With all that information, I used linear weights data from Fangraphs to calculate Ruth’s wOBA (Weighted On-Base Average). From there, I could estimate Ruth’s new offensive contribution.

According to these (probably very inaccurate) results, as a .600 hitter, Ruth more than doubles his production, even with the complete loss of power. This re-affirms the importance of reaching base over swinging for the fences. It also shows how damn valuable a .600 hitter would be, even if he can’t hit a double in the gap with his contract on the line.

“If I’d just tried for them dinky singles I could’ve batted around .600.”

Oh, what could have been, Mr. Ruth.