Last night, at around 7:20 pm Eastern Daylight Time, Alex Rodriguez homered to right-center field to collect career hit number 3,000. It was the first pitch he saw from Justin Verlander in the at bat, a 95-mph fastball (at least Verlander’s velocity is back!). Rodriguez received a standing ovation as he came to bat. After the homer, he high-fived teammates, coaches, Joe Girardi, and maybe even a reluctant bat boy. He then emerged from the dugout to acknowledge the curtain call that the entire Bronx borough was giving him.

Even before all this happened yesterday, one of my editors asked me if I wanted to write about A-Rod’s (then impending) 3,000th hit.

“Want to write about what A-Rod’s 3,000th hit should mean to baseball?” he asked, with my emphasis added.

My answer was swift, but lengthy: “I don’t know if I can. His exit from Seattle was so bad and he’s left nothing but narcissistic waste in his path. My loathing for him would taint any potential positive angle.”

“I’m kind of okay with that. I like when you’re opinionated.” It was inevitable; he was tasking me with this burden. Yet, maybe it can be a catharsis.

Maybe I can utilize this little digital soapbox to shout, hilariously, dementedly, through the Matrix at you readers and expunge some – not possibly all – of my disdain for Rodriguez. I can tell as much of the world as will pay attention how much I wanted to smash his face into that mirror he was kissing. 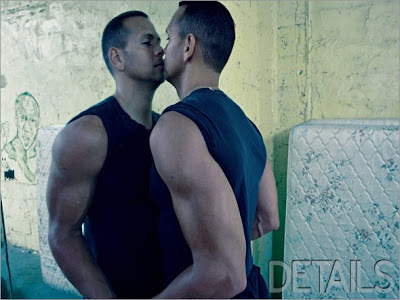 I’m certainly not here to bemoan the death knell of yet another of baseball’s so-called sacred records. Don’t get me wrong, I don’t begrudge Jayson Stark his opinion. I just don’t think that way most of the time. I’m not here to argue the sanctity of the game or its milestones (honestly, I feel that is 95% bull and an antiquated way of thinking that coincidentally precedes the inclusion of non-Whites in the game). Mostly, and maybe in some similar fashion to Stark – who had time to write earlier than me, because he doesn’t have to work to pay the bills aside from writing – I’m here to address the question: Who cares?

I’ll start with myself. Me? I don’t really give a heaping load of … you know what. It used to be that we cared a lot here in Seattle. Back when the Seattle Mariners were constructing one of the greatest offenses in modern baseball with Ken Griffey, Jr. in his prime and before he needed to learn to stretch his hamstrings. Griffey anchored a lineup with Edgar Martinez, Jay Buhner, and a skinny kid from Miami named Alex. Griffey left for the Cincinnati Reds after the ’99 season, but the emergence of Rodriguez as an antithetical shortstop who could consistently mash rescued some of our lost hopes. The very next year, Pat Gillick (that old “master architect”) attempted to secure Rodriguez’s services for another seven years, to the tune of $117.5 million. In retrospect, it’s fortunate A-Rod turned that down for a mere quarter of a billion dollars from the Texas Rangers.

Despite having no earthly clue how to use this toy called The Postseason, the Mariners just steamrolled the entire league the next year for a record 116 victories. They did it without Alex.

Every time he showed back up in Seattle, he was showered with money – real and fake – from the stands above and severely booed every single time he strode into the batters box with all that lip gloss on. We had our time feeling spurned. We seethed and yelled and threatened and came out of our Politically Correct shells. All that is gone now. No matter how many accomplishments A-Rod achieves – PEDs or not – he’s kind of a laughable afterthought 15 years later.

So, this answers two parts of the question. I couldn’t care less; it’s a reality, but one so much less significant to me than so many others – baseball or not. It also proves that almost nobody in Seattle cares. For example, my good friend Eddie– who is now teaching English abroad– and I talk baseball constantly, and we hardly uttered a texted word to each other about it (all Eddie said was that he’d just heard A-Rod referred to as “Taint-Rod” and laughed through those Internet tubes).

My two favorite baristas, Mike (Tigers fan) and Colleen (Yankees fan) had simply this to say about it this morning: “Honestly, we agreed that we will give him credit for 1,000 hits for his career.”

What about people outside of Seattle? Well, my Twitter feed barely felt abuzz when it happened. It was mentioned by several folks I follow, and I follow a lot of baseball folks, but with little more import than any other home run. Aside from the folks at Yankee Stadium, the fanfare seemed to be pretty minimal. I bet there are plenty of folks in the Bronx who, at the moment, were just more concerned with how to pay rent (maybe in one of A-Rod’s slum properties?!?).

It’s not clear that the rest of New York City cared much, other than to slight the accomplishment. Even the New York Daily news thinks A-Rod is an assclown. 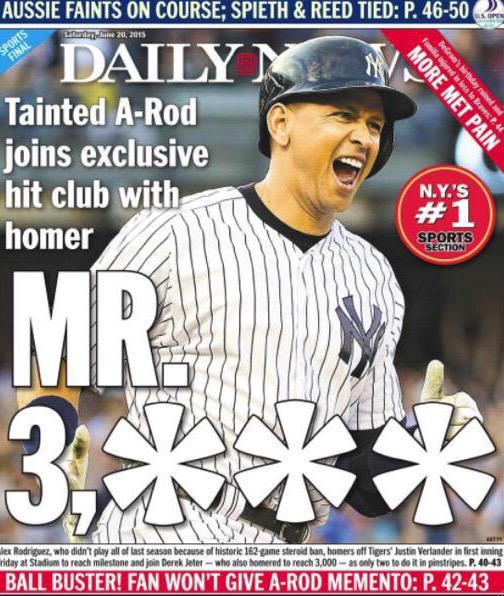 Ouch! I thought we were past The Age of the Asterisk. Guess not!

The New York Yankees cared just enough to mention it, but are adamant in their refusal to pay Rodriguez the milestone bonus for hit number 3,000, or any other milestone.

Regardless of the A-Rod redemption narrative threading through this season, it would seem that A-Rod, himself, is the only person who really cares. I think particularly so, because he homered for hit number 3,000 just like his lip gloss twin, Derek Jeter, did. Rodriguez’s need for approval and attention-seeking behaviors may seem subdued this season, but I’m pretty sure it hurts him just a little bit that hardly anybody cares. At least in comparison to the fanfare surrounding Jeter’s 3,000th.

I mean, come on, even the guy who caught Jeets’s 3,000th just gave it back to him, asking for nothing in return. Meanwhile, that moronic “Ball Hawk” who caught A-Rod’s last night said he has no intention of giving the ball back.

It seems, to an extent, that the old English proverb, “A friend’s eye is a good mirror,” might apply here.