Jeff Samardzija had a disastrous 2015, performing well below expectations. He had a career-high 4.96 ERA, a career-low 6.86 K/9, and led the major leagues in runs allowed and hits. Samardzija had, undoubtedly, the worst season of his major league career, was one of the least effective pitchers in baseball, and yet, he was just signed to a five-year, $90-million deal by the San Francisco Giants. The Giants are a smart franchise, and they certainly didn’t sign Samardzija with the expectation of another season with an ERA near five. They’re betting $90 million on a big bounce-back. The question isn’t whether Samardzija will rebound—he certainly is a better pitcher than 2015 showed—but will he improve enough to be worth $18M a year?

Much of Samardzija’s struggles were a direct result of his slider, splitter, and sinker. These three pitches were previously his best options, but were hammered in 2015. 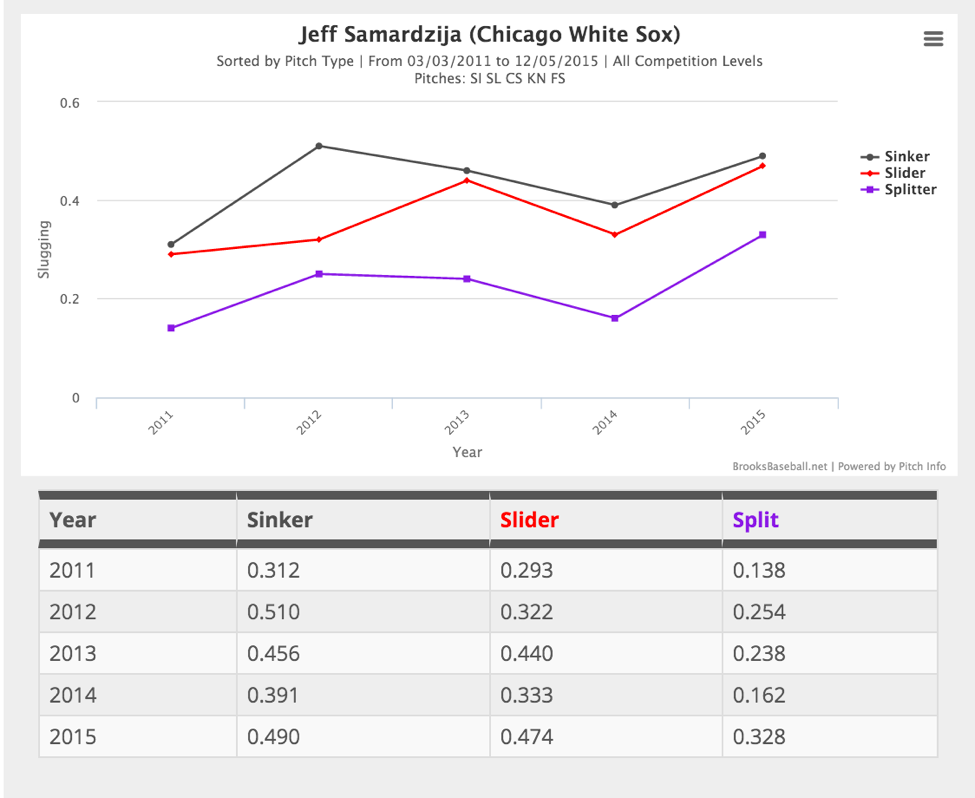 When looking at the slugging percentage of the three pitches, it’s clear that they weren’t the weapons they used to be. Why this is happening will be mentioned later, but the fact that his three best pitches have turned into liabilities doesn’t make his struggles surprising.

Another aspect of Samardzija’s game that ticked down in 2015 was his ability to induce groundballs. His 39 percent groundball percentage was a far cry from his 50.2 percent mark in 2014. Samardzija didn’t have a significantly higher home run per fly ball ratio last year, but he gave up nine more home runs than 2014 thanks to the increase in fly balls allowed. When it comes to causing groundballs, the sinker is generally his most useful pitch. It has the highest groundball rate of all his pitches. He induced grounders at a 61.8 percent rate in 2014, but that mark dropped to 53 percent in 2015. Samardzija’s other key pitch for the groundball is his splitter, but like the sinker, it saw a drop in effectiveness, from a 55 percent groundball rate in 2014 to 48 percent in 2015.

Samardzija also saw a decrease in strikeouts, going from an 8.28 K/9 in 2014 to 6.86 in 2015. Once again, we can look at Samardzija’s pitches to find the culprit. His splitter and slider saw big decreases in whiff percentages, as did his sinker.

So, it has been established that much of Samardzija’s struggles can be traced to his individual pitches. But what is it about the pitches that have gone awry? One answer may be his velocity. Samardzija’s velocity has trended downward from 2014: his fastball, sinker, slider, and splitter have all lost close to a mile per hour. Was this just a bad season, age, or an injury? Either way, the loss of velocity is very worrisome—not just for his performance, but for his health. Lost velocity generally doesn’t come back, either. Samardzija may have to learn how to pitch without as much zip on his pitches.

While most of his pitches haven’t seen a change in movement, his slider has flattened out. The pitch had 1.07 vertical inches of movement in 2014, but the 30-year-old was unable to maintain the movement, as it had just .3 inches of drop last season. It’s unknown what caused this, but Samardzija will have to hope that he can get his slider back to pre-2015 levels next year if he wants it to become a plus slider again.

Samardzija’s control actually improved in 2015, but his command did not. Yes, he was able to find the strike zone more than usual, but his ability to spot pitches was an issue. This problem created serious issues for Samardzija’s splitter.

While it’s not a huge difference, Samardzija appears to be struggling to keep the splitter down in the zone. The percentage of times his splitter has found the strike zone jumped from 24.7 percent to 36.2 percent in 2015. The splitter works best low, often out of the strike zone, making it nearly impossible to get on top of.  Not only does this answer why Samardzija isn’t getting as many whiffs on the pitch, but also why his groundballs are down.

Inexplicably, Samardzija’s pitch usage was altered significantly in 2015. Some of his best pitches were thrown less, and this certainly hurt his results. Hopefully the Giants revert his pitch mix back to 2014 levels. His individual pitch usage worked well two years ago, but when it was changed, things went downhill.

Pitch usage is the “easy” part of fixing Samardzija. The hard part is, well, everything else. The Giants can’t just snap their fingers and have his velocity go up, or have his movement on the slider return to its old ways. It will also take work for him to improve his command of the splitter, and get it down, or out, of the strike zone. If the Giants get 2015 Samardzija, without any bad luck, he could have a low-four ERA, as evidenced by his 4.31 xFIP and 4.18 SIERA.

Samardzija will need to see his sinker, slider, and splitter all return to close to 2014 form, and that’s a tall task to ask of the 30-year-old. Right now, it’s hard to expect Samardzija to have an ERA much lower than 4.00. While Samardzija isn’t exactly injury-prone, his decrease in velocity last season could be a precursor to arm trouble. Samardzija does have upside, but his downside is just as large. The risk/reward ratio isn’t ideal, especially when you’re paying $90M.