Looking Back On The 2001 Seattle Mariners

Last week, before the Golden State Warriors had a single loss this season, my fellow editor asked me to revisit the record-setting 2001 Seattle Mariners. I’m pretty sure the only parallel between those M’s and the current Warriors squad is the possibility of both holding the single-season record for team wins.

For clarity’s sake, the 2001 Mariners only tied the 1906 Chicago Cubs with 116 wins. Those Mariners did, however, capture the all-time record for single-season wins by an American League team. The Warriors will need to best a 1996 Chicago Bulls’ 72-win season. As a nifty aside, the braintrust at FiveThirtyEight.com gives the Warriors a very healthy 31 percent chance of winning at least 73 games just a week ago.

Coming into that season, the Mariners weren’t supposed to be that good. In the three years leading up to their 25th as a franchise, we mournfully, sometimes scornfully, watched the departure of Ken Griffey Jr., Randy Johnson, and now-perennial pariah, Alex Rodriguez. That’s the baseball equivalent of trying to keep trotting out episodes of M*A*S*H without Radar, Klinger, Hot Lips Houlihan, and Capt. Pierce. It just shouldn’t work.

Yet, somehow it did. The M’s came flying out of the gate, winning 20 games in April. In May, they put the pedal to the metal and won another 20, pushing their record to 40-12, an astounding 28 games over .500. Safeco Field, which still had that new stadium smell, was packed on a nightly basis.

This is what it felt like to root for a winning team! The shock and awe of the early-season lapping of their AL West opponents waned as summer heated up. We began to expect the nightly thrashing the M’s would hand out. I mean, Aaron Sele was 8-0 by the end of May. Did he think he was first half Ubaldo Jimenez from 2010?!? That’s a weak joke, deal with it. And they never let up the whole season.

The starting rotation, which featured Sele, Jamie Moyer, Paul Abbott, Freddy Garcia, and John Halama combined for an amazing 69 percent of the team’s wins! Moyer won 20 games by featuring a pitch repertoire of 17 different changeups and ‘cheese’ that topped out at maybe 82 mph.

Our bullpen was awesome, too! Our closer was a hard-drinking dude named Kazuhiro Sasaki – I know this, because he drank at a bar my buddy and I went to after games and the owner would tell stories. Also, we had a relief arm, Jose Paniagua, whose last name translates into “water water” (“pani” in Hindu and “agua” in Spanish). Tack on former Cincinnati Reds’ Nasty Boy Norm Charlton, and you knew late leads were close.

On the offensive side of things, it seemed we were treated to a perfect storm of surprises. First, you had Ichiro Suzuki proving all the doubters wrong, that position players from Japan could not only succeed, but also dominate. Then you had a 38-year-old Edgar Martinez still mashing away. In 2001, he slashed .306/.423/.543 and drove in 116 runs, second on the team to new second baseman Bret Boone. Boone led the league with 141 RBIs, just beating out fellow P90X user Barry Bonds by four.

More amazingly than anything else was the Mariners proclivity for scoring runs with two outs. I looked it up, it’s true and not just the suspect power of memory. They scored 36.6 percent of their 927 runs with two outs; that’s 339 runs with two outs in any base-runner situation! Their .816 OPS with two outs and a man on third as a team seems ridiculous now that M’s fans have gotten used to that being a hopeless situation. For statistical contrast, the 2015 version of the Mariners had a team OPS of .601 (what the s**t?!?) in that same situation. So, the ’01 M’s were almost video game ridiculous at scoring when they were down to their supposed last hitter of an inning.

It all seems so far away, I can barely hear the echoes of that stilted cheer or “EE-CHEE-ROW!!” coming from nearly 48,000 people. 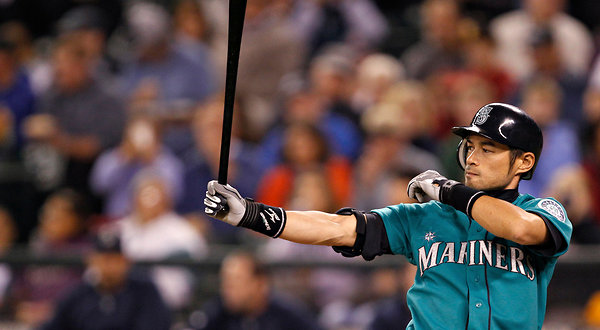 One of most awkward looking hitters of all time.

In looking back over some numbers and articles regarding that insane season, I came upon David Schoenfield’s reflection. What caught my attention was his initial assertion all M’s fans have their “favorite game from 2001.” That translated into ‘most memorable game’ in my mind. Despite 116 victories to choose from, my mind hung onto one regrettably unforgettable defeat.

The game was on August 5 against the Cleveland Indians. I’m pretty sure what the M’s did that day still stands as a record. When the top of the fifth inning was over the Mariners had a huge 14-to-2 lead. Going 31 games over .500 by the end of the night looked to be an inevitability. Tragically, they never scored again. From the bottom of the seventh on, it was a bloodletting, as the Indians would score three in the seventh, four in the eighth, and five in the ninth to tie the game. In those three innings, the Mariners achieved infamy by being the only team ever to blow a 12-run lead. I remember yelling; yelling things I wouldn’t even want to utter here. That might have been the day I became borderline hypertensive. Regardless, it’s a lasting memory.

Unfortunately, my most memorable regular season game of 2001 portended their eventual postseason failure. As luck would have it, the Arizona Diamondbacks would avenge the Mariners.