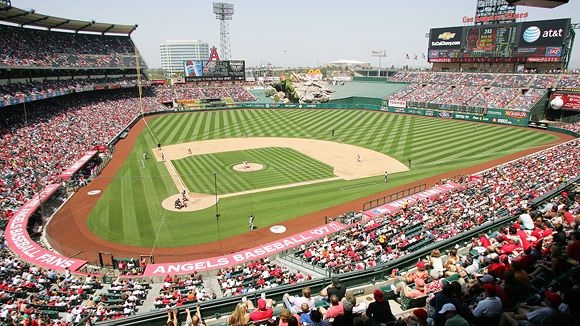 Angel Stadium was built in 1966 and is now the fourth oldest ballpark in the major leagues after Fenway, Wrigley and its nearby cousin Dodger Stadium. Like most ballparks of the era, it was built in a suburban area far removed the hullabaloo of urban city centers. Often affectionately called “The Big A,” it really does have a giant “A” sign out in front of the ballpark, which was originally a scoreboard support and gets lit up when the Angels win so that passersby can get excited while they’re stuck in traffic. In fact, there’s a fan expression, “Light Up the Halo.” that originates here. It works, since it’s a nice mélange of Angels and halos and light and baseball victories.

The ballpark has seen some renovations in its half-century of existence, including a “California Spectacular” of fountains and trees beyond the outfield walls that was constructed when Disney owned the team in the 1990s. It remains cool to see geysers erupt and for fireworks to shoot out when the Angels win or hit a home run.

There’s not a ton of baseball history at this park, though Nolan Ryan did throw two no-hitters here and the Angels won their only World Series here in 2002. There are two very notable “only here” items: Thunder Stix rose to popularity here during that World Series when fans used them to deafen the ears of people in attendance and watching on television. And the Rally Monkey is unique to this ballpark, a video of a primate who jumps around to rally the Angels when they are trailing late in the game. He became a TV star during that World Series and has since entered popular culture.

Fun Fact: The climactic scene of the first Naked Gun movie was filmed here, when Reggie Jackson tried to assassinate the Queen. He failed.