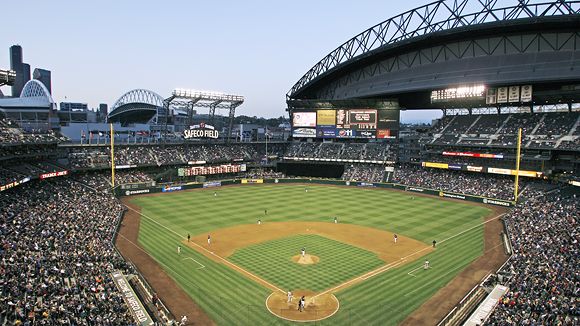 Opened in 1999 to replace the indoor playpen known as the Kingdome, this retractable roofed ballpark was another in a long line of “retro-style” parks with a brick façade and asymmetrical field. Owned by Nintendo, there are Japanese-language signs around the park along with English.

The Mariners are still the only American League to have never played in a World Series, and haven’t had a ton of success in their history. One of their biggest moments – if not the biggest – was Edgar Martinez’s double that scored Ken Griffey Jr. in the 1995 Division Series against the Yankees, completing a comeback and advancing the team to its first (and thus far only) appearance in the AL Championship Series. “The Double” is also credited with helping save baseball in Seattle by helping to fire up support for a new ballpark that became Safeco Field and thus preventing the team from leaving town. The ballpark features a mural paying tribute to this important-to-team-history hit.

The Mariners finally have a Hall of Famer now in Ken Griffey Jr. and there will almost certainly be some sort of tribute to him coming to Safeco Field. There is a Mariners Hall of Fame that has nine inductees, with plaques and video highlights of their accomplishments. There is also the Baseball Museum of the Pacific Northwest, which is all about the history of baseball in Florida. Just kidding…it’s really about the history of baseball and long-defunct teams in the larger area, stretching out to Montana and up to British Columbia.

Check Out: The Pen, an extensive food market inside the center field gate, where you can get much more than just the traditional baseball food items. Also, since Nintendo owns the team, you can use a Nintendo DS app to order food (hardware not included).

Fun Fact: If you look closely at the Mariners logo above the left field seats, you can see the face of an actual clock built in.