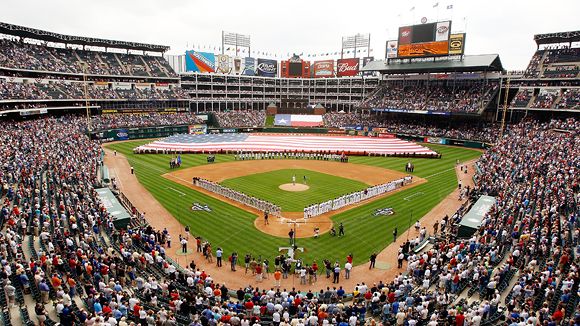 Born in 1994 as The Ballpark in Arlington, it was briefly known as Ameriquest Field and is now technically Globe Life Park, but good luck finding any local fans who will call it that (it’s still “The Ballpark” to them, so that was money well spent by Globe Life). Ideally situated between Dallas and Fort Worth, you know you are in Texas when you are here.

Friezes on the upper façade of the stadium depict scenes of baseball and Texas history, and once you’re inside you can see “Greene’s Hill” out beyond right field. When the Rangers score a run, the park’s Flag Girls come running out waving the Texas flag to celebrate. This would never happen in any other ballpark. Can you imagine, say, the Phillies running out the Pennsylvania flag when their team scored, or the Indians running out Ohio’s flag? Nope, but you’re in Texas now. It’s the Proudest State in the Union and they are not afraid to tell you so.

The ballpark features many callouts to other parks, such as a scoreboard embedded in the left field wall (like Fenway Park), arched windows (like old Comiskey Park), and a white steel frieze atop the park (like old Yankee Stadium). This is Texas Baseball as influenced by the ballparks that came earlier.

Check Out: The team Hall of Fame, with nineteen current inductees. The franchise has won two pennants and no World Series as of this writing, and has retired the number of just one former player (Nolan Ryan), but they do a good job honoring those who have served the franchise well in any capacity.

Fun Fact: The locals call the place The Ballpark, but another name they use is The Temple. So if you want to see a Rangers game and look like a local, you can also use that term. And don’t forget your boots.

This concludes our trip through the ballparks of the AL West Division, thorough but by no means exhaustive. Have fun exploring on your own. Happy Trails!

Up next: The NL East.