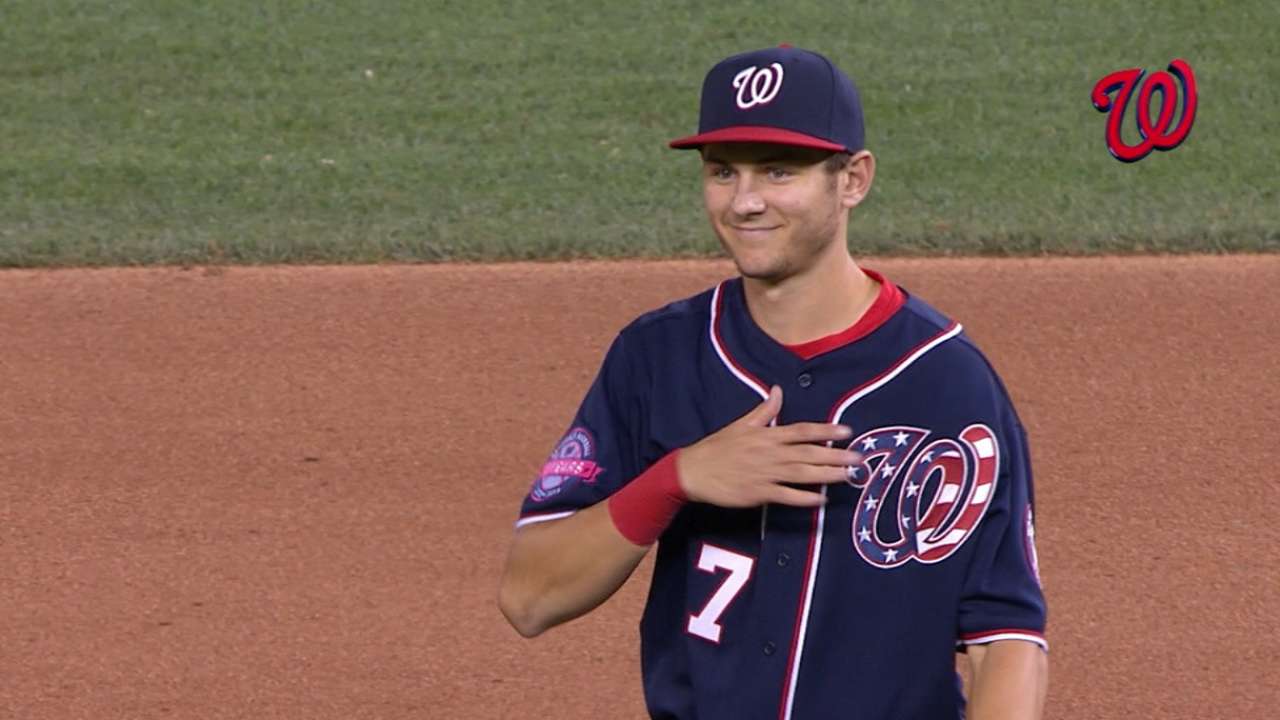 Of all the top prospects in the Nationals’ system, Trea Turner may have the best shot of making the Opening Day lineup. (Credit: MLB.com)

Lopez had a season for the ages in 2014, pitching to a 1.08 ERA in 16 starts at Low- and Single-A. He was signed as a relatively unknown 18-year-old prospect out of the Dominican Republic in 2012 with a fastball in the upper-80s. Now, as the Nationals have bulked him up and smoothed out his delivery, Lopez is sniffing triple digits with his fastball. He is continuing to develop his curveball and changeup. Lopez does not have ideal height for a right-handed starter, but the Nationals and their coaches have worked to adjust his arm slot to create a more downward trajectory to generate more outs on the ground.

Lopez missed most of the 2013 season with injuries, and has thrown only 198.1 innings in four professional seasons. The Nationals held the 22-year-old back towards the end of the 2015 season, and he was limited to 99.0 innings, a slight bump from 2014’s total of 83.1. Lopez still has plenty of upside entering the 2016 season. He still has plenty of room to grow as a pitcher, but all of the raw tools are there. For a pitcher who did not sign until age 18 — old for a Latin American prospect — Lopez shows good command and keeps walks to a minimum.

Fedde did not pitch in 2014 after being drafted out of UNLV due to Tommy John surgery. Over a year removed from the surgery, Fedde finds himself on MLB’s top-100 prospects, checking in at number 78. He made his professional debut in June and made 14 starts before the end of the season. The 22-year-old right-hander logged 64.0 innings, recording a 3.38 ERA, 8.3 K/9, and 2.2 BB/9.

Fedde can run his fastball up to 97 mph, but sits closer to the mid-90s. He has good life on his fastball. Fedde’s slider is his second-best pitch, but it is inconsistent. He also has a changeup that shows some potential. Fedde’s secondary pitches should continue to develop as he continues returning to full health after the surgery. The Nationals have been one of the best organizations in recent years when it comes to developing pitching prospects post-TJ.

Robles may be the best overall athlete in the Washington system. He has a mature approach at the plate that is far beyond his years. With plus speed (already a 70 on the 20-80 scale), Robles should be able to man center field. His arm is also very strong for his age. As he continues to develop, Robles should continue hitting for high average while also adding power. Overall, there is a lot to be excited about with Victor Robles. He is still a few years away from impacting the big-league club, but the early signs point to Robles being a future star.

Does anyone think the Padres won’t kick themselves years down the road for trading Joe Ross and Trea Turner for Wil Myers? Yeah, me neither. Both players traded by the Padres prior to the 2014 season reached the big leagues with the Nationals in 2015 and figure to be fixtures in Washington for years to come. Turner has a shot to be the Opening Day starter this season, but Danny Espinosa may be given the job so as to give Turner, the 11th-best prospect according to MLB, more time to develop at Triple-A Syracuse.

Drafted out of NC State, Turner is already very polished offensively. His power could make him a threat to hit 10-15 home runs every year. Turner’s best tool on offense is his speed. He led the NCAA in stolen bases as a freshman with 57 and has stolen 52 bases in 185 games in the minors. Turner clearly knows how to utilize his speed, having been caught only 10 times. His swing can get a little bit long when trying too hard to hit for power. If Turner can cut down on his swing and stay within himself, he could become one of the best leadoff hitters in the game.

On defense, Turner has the arm strength and mobility to stick at shortstop. He will not be a nightly Web Gems producer, but will make all of the plays expected of a big-league shortstop. The Nationals may be targeting 2017 for Turner’s full-time ascension to the starting lineup. However, if he hits in Spring Training, it may be hard to stick with Espinosa.

Giolito is a prime example of the risks a team with an already elite rotation can take with its draft picks. Giolito slid to the Nationals with the 16th pick because of concerns surrounding the health of the UCL in his throwing elbow. The big righty eventually went under the knife for Tommy John and missed most of the 2012 season. He did not pitch a full season until 2014, and the Nationals have brought him along slowly. Giolito appeared in a career-high 21 games in 2015 while logging another high with 117.0 innings.

Giolito reached Double-A Harrisburg in the second half of the 2015 season and dealt with some adversity for the first time in his career. His ERA climbed to 3.80 in eight starts at the higher level, but he was not necessarily hit around excessively. There were flashes of the same dominance showed at the Single-A levels.

Baseball’s consensus top pitching prospect has a high-90s fastball and a knee-buckling 12-to-6 curveball. He continues to develop his changeup, and it is already a good weapon against left-handed hitters. Giolito can throw all three of his pitches in any count or situation, and has the maturity on the mound to battle through brief lapses in control. If he begins losing the feel for a certain pitch in the middle of a start, Giolito will focus to re-establish that pitch. When all three of his pitches are working, Giolito is nearly unhittable for minor-league hitters.

There may be calls for Giolito in Washington this season, and he could well make his debut if the Nationals begin to falter. Giolito has not handled a full workload yet in his career, and getting him through more than 20 starts should be the primary goal for the Nationals in 2016. Giolito’s workload has increased each of the past two seasons, and he may approach 150 innings in 2016. Look for the Nationals to start Giolito back at the Double-A level with an eye on a mid-season promotion to Triple-A if things go according to plan. A late-season debut is not out of the question, but A.J. Cole may get the call first to give the top prospect more time to develop.