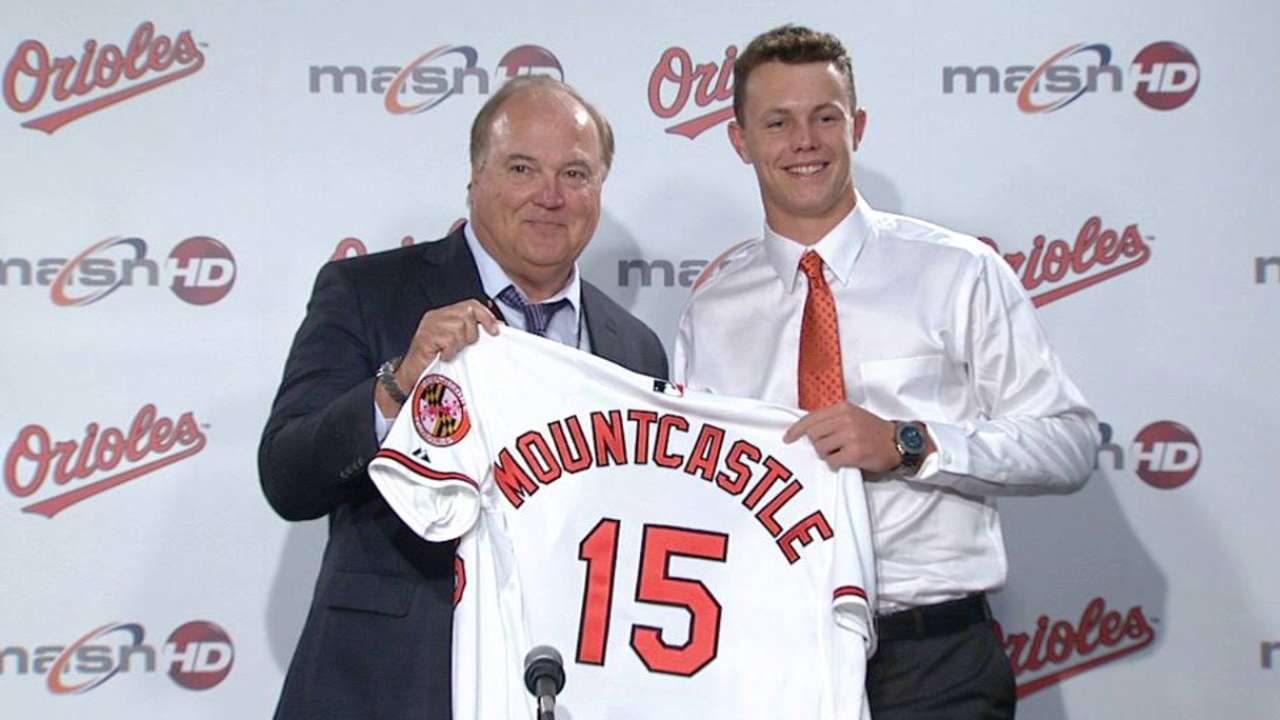 The Orioles gave up two international bonus slots to get Lee. That’s a lot to give up for a pitching prospect for most teams, but not the Orioles. It’s fairly easy to see that virtually all of the Orioles’ top prospects were drafted, not signed as international free agents. Lee had success for the Orioles’ High-A and Double-A teams, and was added to the 40-man roster at the end of the season.

Baltimore’s starting pitching prospects are skewed heavily toward the right side of the rubber. Getting some sort of left-handed starting pitching depth can only help the organization down the road. Lee works in the low-90s with his fastball, throwing it down in the zone with good sink. In his minor-league career, Lee has gotten nearly twice as many outs on the ground as in the air. He gave up only two home runs in 145.0 innings last year. Lee backs up his fastball with a slider that he throws with two different breaking patterns — a tight breaker approaching the upper-80s and a big sweeping slider in the low-80s. His changeup still needs work.

The Orioles worked hard with Lee to refine his delivery and make it more repeatable. He got good results in his first year in Baltimore’s farm system. The 23-year-old must still work on making his changeup a more viable big-league pitch to stick as a starter. If his changeup continues to lag behind his fastball and slider, Lee’s destiny with the Orioles may be in the bullpen.

Wright gave the Orioles a taste of how good he can be with back-to-back dominant outings to begin his MLB career. The 26-year-old right-hander would not show that same level of dominance over the remainder of the season. Wright’s rookie campaign ended with a 3-5 record and 6.05 ERA. He appeared in 12 games, starting nine.

The East Carolina University product has the appearance of a durable, mid-rotation starter at the big-league level, but still has to grow as a pitcher to remain a starter. Wright is a great example of a guy who is still a thrower, not a pitcher. Combining Wright’s stuff with Tyler Wilson’s makeup would make for one heck of a pitching prospect. Unfortunately, it doesn’t work that way.

Wright can run his fastball up to 97 mph, and it has good sink coming on a downward trajectory from his high release point. His changeup is his second-best pitch, with his slider not far behind. With Wright, the question is not whether these pitches can play at the big-league level — he has already shown flashes — but whether he can perform consistently from start to start. When Wright first came up last season, he appeared measured and calm on the mound. Down the stretch, as he struggled, Wright seemed to be trying to reach back and chuck his fastball through a brick wall. When that happens, the arm speeds up, the back doesn’t bend, and the ball stays up in the zone. He will get a chance to contend for the final spot in the rotation, but in the long run, Mike Wright may be best used in short bursts out of the bullpen.

The Orioles made this bad-body outfielder from Florida State their first pick in the 2015 MLB Draft. It was a questionable pick to some in baseball, but Stewart was perceived as very signable for the Orioles. Immediately, there were a ton of questions about Stewart’s future as a big-league prospect. He batted from an extreme crouch while at FSU and did not produce a great deal of power. The Orioles need to work on getting Stewart to stand more upright in the box, and his stance may have played a part in his dismal .218/.288/.345 line in 62 games with Low-A Aberdeen. Stewart may have been better off starting slow with the rookies given the flaws in his swing, but more is expected of a first-round college selection.

Stewart’s crouch has become less pronounced since joining the Orioles, but he’s still not standing completely upright at the plate. As he worked through the issues with his stance last season, Stewart did not always appear comfortable. Better to correct the stance at the lower levels than to allow the issues to compound as he advances to higher levels.

Stewart still has a lot to prove if he is ever going to justify his first-round status. He is not as bad an athlete as his stocky build would indicate. Stewart was an All-State running back in Florida, and runs and defends in left better than most 230-pounders. His arm is below-average, however, which will lock him into left field. Stewart is going to have to hit his way into the big leagues. Having seen the almost immediate big-league success of college picks like Michael Conforto, Kyle Schwarber, Kris Bryant, and Trea Turner, it may be hard for some Orioles fans to be patient with Stewart, but he is much more of a project than any of those players.

Mancini has hit well at every level since being drafted out of Notre Dame, but nothing compared to what he did in 2015. Over 136 games at the High-A and Double-A level, Mancini rolled up a slash line of .341/.375/.563 with 43 doubles, six triples, 21 home runs, and 89 RBIs. He earned the Orioles’ Minor League Player of the Year Award for his efforts. Entering the 2015 season, Mancini was viewed as a mid-tier prospect due to concerns about his ability to hit for power and play the field. He should have begun to answer some of the questions about his offensive future with last year’s effort.

Mancini is quick to the ball and seemed to hit the ball hard every time he batted last year. His swing is not overly polished, but he gets the bat head out quickly. Minor tweaks to his swing in Spring Training last season as well as added strength helped him begin to tap into the power in his 6’4″ frame. There will still be some skeptics when a slightly older prospect puts up numbers like Mancini did in 2015. His .413 BABIP is extremely unsustainable, even at the minor league level. Still, Mancini is a better hitter than many are willing to give him credit for, something that tends to happen to mid-round, right-handed first basemen.

In the field, Mancini is not a great athlete, but he has worked hard to improve his defense. He is typically one of the last players to wrap up fielding practice on gameday, and is clearly working hard to smooth out his rough edges defensively. His throwing and footwork are a little awkward and stiff, but he is working hard. It might not be pretty, but Mancini will make most of the plays asked of him at first base.

Mancini and Chrisitian Walker are in the same boat when it comes to their status with the Orioles. Neither is ever going to supplant Chris Davis at first base, nor do they have the athleticism to play outfield. It’s hard to say where both will end up in 2016. One will likely win the backup first base job with the big-league club, while the other starts for Triple-A. If Mancini continues hit hot hitting this season, he could also become a useful trade chip. He has shown good development as a hitter in three professional seasons. Like Walker, he will really have to hit to stick with the Orioles in any way.

Mountcastle was drafted with the compensatory pick the Orioles received after Nelson Cruz signed with the Seattle Mariners. As with the team’s other 2015 first-round pick, D.J. Stewart, Mountcastle may have been picked in an effort to draft a player and sign him below slot value. Pre-draft lists had Mountcastle ranked outside of the top-100 players in the draft. With that being said, there are still plenty of reasons to like Mountcastle as a prospect.

The Florida shortstop does have excellent bat speed and consistently makes hard contact. He has good power for a shortstop. Defensively, Mountcastle is still a bit of a project. He played a fair amount of third base on the high school showcase tour, and may be ticketed for the hot corner as he advances through the farm system. The 18-year-old does have a good arm. For now, it’s likely too early to completely give up on him as a shortstop. As he matures, Mountcastle may develop into a better defensive player at shortstop. That decision may also depend on whether or not the Orioles are able to lock up Manny Machado with a long-term extension and whether or not he is moved back to his original position.